Sony just announced two smart lenses called QX10 and QX100. Though I initially thought Smart Lenses was just another label Sony's marketing department had made up, these lenses actually are pretty smart! They work together with iOS and Android smartphones, through Wifi (or NFC) to allow you to take pictures using your phone but with much better IQ.

Gordon's already posted previews of the two smart lenses, which you can find here:

I for one am very interested in the QX10 to use for daily snaps. My M9-P is a delight to shoot with, but sometimes (very rarely, but it happens) I just don't feel like carrying it around. These look like an ideal solution to bump up the IQ of my iPhone, while simultaneously making it so much more versatile.

The QX10 is also interesting for me. One flaw with most cameras is that the optical system and viewfinder are attached, and it would open up more possibilities if they were separated. If Gordon's mention of Â£179 is a fair representation of street price, I could see myself getting one.

Quite an interesting idea, I believe. The QX100 might be too large for most people including myself, so if I were to buy one, it'd be the QX10. Personally I don't like the white version of the QX10, but that's just personal opinion.

It would be pretty nice to test it myself, maybe sometime I'll try at some store. Will Gordon write an in-depth review? Thanks

Haven't had much time to play with it yet, so what I'm saying is probably contained in other (p)reviews.

In rest position the main unit is pretty small compared to interchangeable lens system lenses. It is about the size of a thick pancake. It connects to the phone holder in a similar style to interchangeable lenses, but it doesn't feel quite as slick. The phone holder folds flat when not in use, and has two arms to grip either side of the phone, one of which is sprung to ive tension.

Inside the unit you can fit the battery and either a micro-SD or equivalent memory stick. I happened to recycle a 16GB one I bought for a phone I don't use any more. This is hidden under a cover which doesn't feel very secure, but as it isn't something you need to use it will suffice. The wifi ID and password are stuck on the inside of this cover.

There's a micro-USB connector under a hard plastic flap. This feels really horrible and I can't see it lasting for long. It will be a matter not if but when I will snap it off. They should have used a soft rubber cover. If connected to USB that will charge the battery. If you turn it on while connected, you can access the SD card as a storage device, and also a separate area with some licenses, links and the wifi settings. I don't know if this is for reading only, or if it can be edited to change the wifi ID and password.

I had previously installed the Sony software. On first use, I just mounted it on my android phone and turned it on. The phone detected it and asked if I wanted to connect, prompting for the password. Once entered it connected to the camera over wifi.

Screen updates I'll reserve judgement on. There were quite a lot of occasions when it froze momentarily. I don't know if this is the camera or the phone, but for now don't expect it to necessarily give a continuous stream.

Functionality is very basic. You get a shutter button, and can also control the zoom from the phone or lens. The software only offers choice of 2 or 10 second delay. Nothing else! This is full auto. Not even exposure compensation.

Oh, you can tap to set focus point, but it doesn't take the shot. I don't know if there's a way to configure touch-shoot.

Thanks for sharing your initial impression popo! I hope it will turn out to be a useful every-day accessory for you. Please keep us posted on how it performs!

Used it a little more on and off. Image quality does have the typical compact softness when viewed 100%, although I haven't used it in better light yet to see what its ultimate potential is.

Doesn't sound very promising so far, certainly not for street / candid photography. A friend who lives in my hometown has ordered one too, so I might get to play around with it myself soon.

Found some settings now! Note I still haven't read the manual. Tapping on the mode icon allows you to go between green and gold "Auto" modes, and P. Green is the standard single shot auto. Gold enables it to use multi-shot to further optimise the image. Not really any difference in settings between them. If you venture into P, you can adjust exposure compensation and also white balance. That's it.

Guy at work has bought the QX100, so we had a quick look at them side by side. 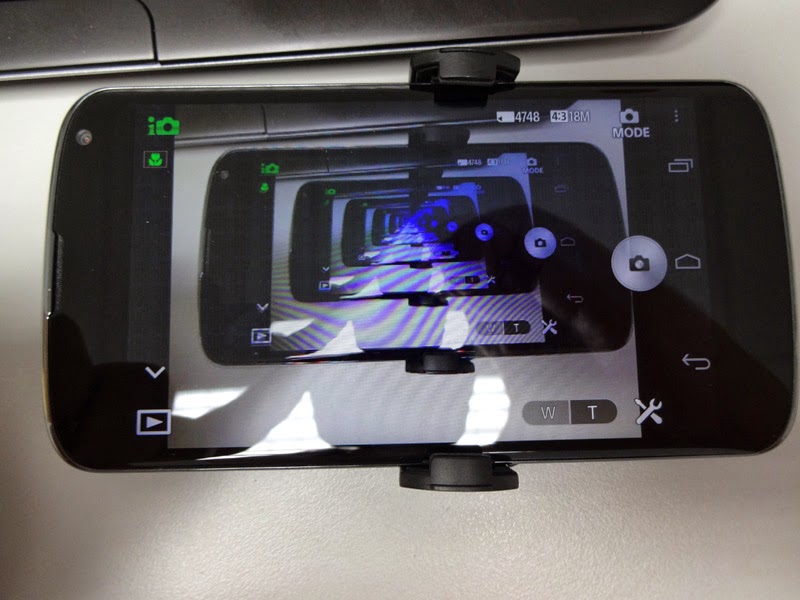 It's not often a camera can take an image of its own screen... ok, it had to be done once. 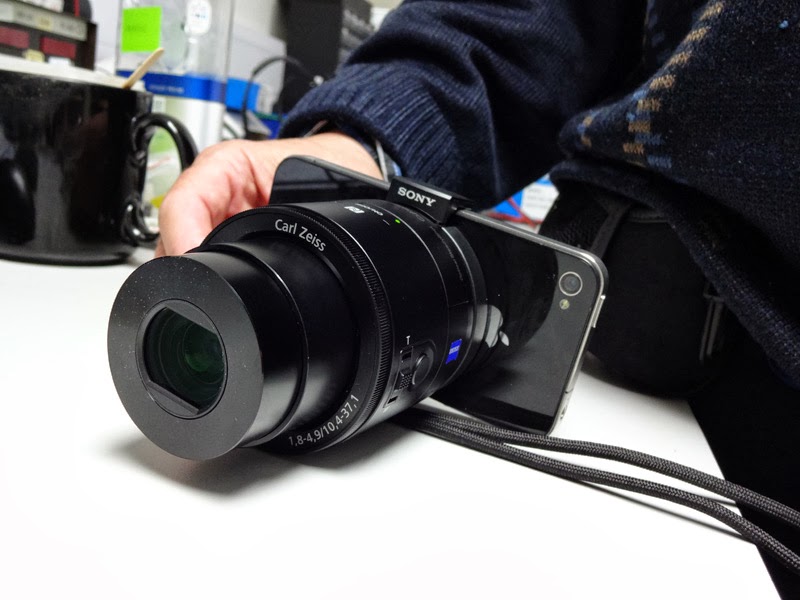 The QX100 mounted on some kind of iPhone, taken by QX10 connected on Nexus 4. 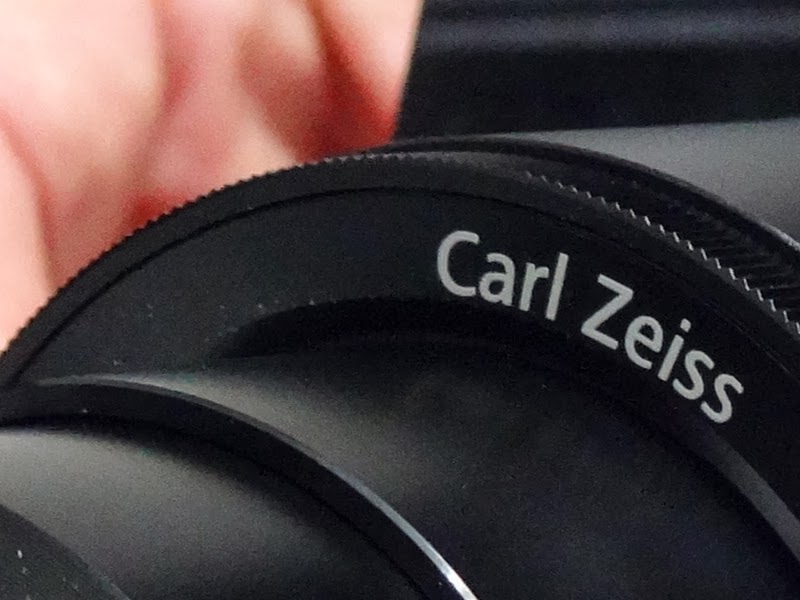 I've hooked up my camera to a TV before and gotten the same effect. Quite interesting to look at for a while, but it's the kind of picture you only have to take once.

My main concerns with the QX10 from your experience so far relate to connectivity. I knew the smart lens didn't have a lot of settings, and I suppose I could live with that on a device like this. The fact that it takes a while to connect sounds bad though, as I do tend to turn the camera on and off quite a lot while walking around a city.

Have you gotten a change to try the Wifi reach? For example, could you leave it in one room and take pictures from the adjacent room? Stick it in a briefcase and take picture while standing next to that briefcase? (yes, I'm thinking of spying on people

Haven't tested range yet. I'd assume it is comparable to regular wifi, which would be "up to" 100m outdoors with nothing else around you.