The Fotodiox adaptor arrived today allowing my newly purchased "used" Mamiya 150mm F2.8 A to be fitted onto my 5D Mark II so I thought I'd give it a fairly extreme test this evening. For those who are unfamiliar with the lens it was built for Mamiya's M645 Medium Format cameras (Wiki) which provided 6.0 x 4.5 cm frames on 120 roll film. The 150mm F2.8 A is manual focus lens.

The montage below is from five shots and each "Moon" is a 100% crop, one each from the center of the frame, top left, top right, bottom right and bottom left. The original images were 5616 x 3744 pixels so, obviously, in producing the montage I've pulled the corner images in to the center. Each crop is 219 x 219 pixels, the lens was wide open at f/2.8 and the shutter speed was 1/500th at ISO 100. 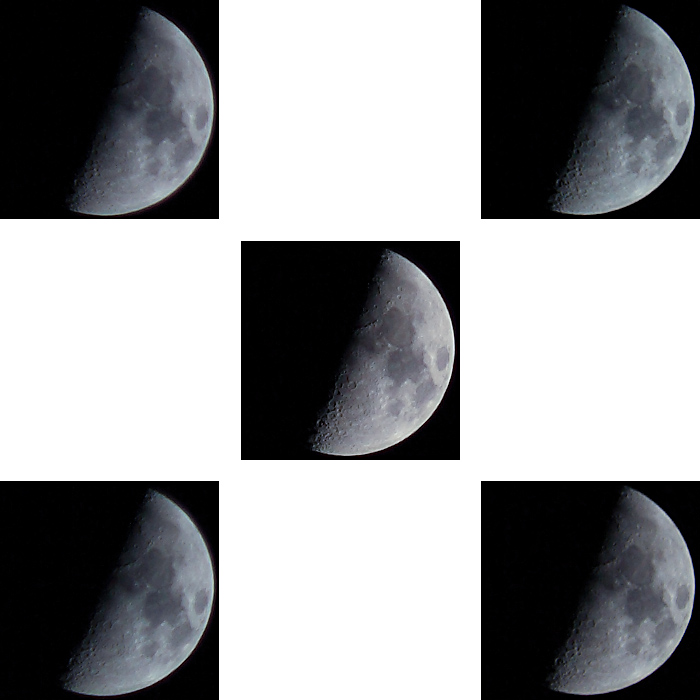 Naturally enough the lens was mounted on a tripod and the camera was hooked up to a notebook to allow live view focussing and remote triggering of the shutter. Mirror lock-up was not used on the assumption that the shutter speed was short enough. Please ignore any shift in tint between the various crops as I rather stupidly corrected the white balance for each image separately rather than waiting until I had assembled the montage.

The only issue was that best focus was obtained with the lens hard up against the infinity stop which argues that the Fotodiox adaptor is either perfect or a micron or two longer than optimal! Turning the focus ring hard against its stop is not something I'm used to and it would have been interesting to be able to move the focus ring just a little further to confirm whether optimum focus was, in fact, at the hard stop. Extreme pixel peeping of the originals shows just a hint of softness in the images at the left edge but in the real world it's not something I'm too concerned about.

This isn't a review section of the forum so I'll just content myself with the observation that the lens feels very well engineered and balanced on the 5D2. Long term plans for this lens are for it to be fitted in front of a dedicated astronomical CCD when a wider field of view is desired than a telescope will provide so I'll make sure that the adaptor for that setup is short enough that I can just get beyond infinity focus. Obviously I'll share those images in this thread when I can but in the meantime I'll see if I can add some more conventional imagery from the 5D2.