pravdo wrote:well, the question was about "working station"... the only such is Mac Pro...


The trouble with Macs is that they are closed systems. The only way I'm likely to have the fun of building one is by working for Apple or, more likely, one of its subcontractors. I'm glad you like your Mac but, given that in my opening post I said that I wanted to run Vista Ultimate x64, I think you are letting your enthusiasm get the better of you.

P.S. Don't get me wrong. I've always thought that Macs are desirable machines but, given my investment in software and my investment in learning how to write software using C++ to run under Windows, owning a Mac is a luxury whose price I've yet to be able to justify. If Apple ever decides to sell licensed copies of OS X to run on an open architecture PC, such as those which normally run either Windows or Unix, then just for the fun of it I'd certainly be interested in installing it in a virtual machine running under Vista.

Well Bob, I always thought "working station" is something what works for me, not me working for it

It's all because I am so far from programing... and because 10 years ago I started on Mac and always hate even to touch that ugly, crashing, all the time infected OS "Windows"... I had to in the office.

no more excursion in that topic, sorry.

Those good folks over at bit-tech have just run a comprehensive test of my intended 6GB Corsair Dominator TR3X6G1600C8D memory as part of their Intel Core i7 Memory Performance test.

Some of the numbers aren't directly relevant to me because they use an unlocked Core i7 965 Extreme Edition to run the tests but I thought I'd share. There's a huge amount of data provided on the benefits, or otherwise, of using various memory timings at various clock speeds. Enjoy.

So Bob, when are you getting it

I done heafty looking around the other night, and i think im gonna get the same spec as you! haha

I've updated the component list in the opening post to include an Enermax power supply and a change of plan on the CPU Cooler front.

I'd originally opted for the Noctua NH-U12P SE1366 but I was concerned about whether there would be sufficient airflow over the fins on the motherboard that surround the CPU. As a result I've now opted for the Noctua NH-C12P (plus mounting kit) with an Arctic Cooling AF 12025 PWM fan which, unlike the fan that comes with the Noctua heatsink, includes PWM speed control.

@Daniel I think it will be a little while yet. Partly due to cash flow, having just bought that 5D MkII, but also because all the GTX 285 graphics cards I've seen so far include the stock NVIDIA cooling. Asus have, with their EN9800GT MATRIX/HTDI/512M, produced a card which automatically underclocks for 2D work. That followed on from the 9600GT version which I have in my Media PC and I was able to set up a custom profile which means the graphics card fan stops for trivial tasks like Blu-ray playback. If Asus can pull off the same trick, or close to it, with a GTX 285 card I'll be well happy.

ahh you are your noise levels Bob =)

us young things just crack our speakers up louder =D

But yeah well maybe by that time the GTX300's will be out (assuming they keep THIS naming scheme) dropping the price on the 285's and 295's.

Augh im gonna swap CPU's with my uncle getting his Q6600 in the mean time to squeeze as much life out of this 775 board as possible.


My Main quibble is image loading times, but i fear this is the hard drive limiting rather than anything else, im gonna look up some stuff and make a new thread about this anyway so ill not take over your thread =)


Like you I thought it was pretty ambitious but I've just seen this review of the GTX 285 graphics card. The test rig was
OK, just one smallish hard drive and just 3GB of DDR3 memory but the power consumption graph looks very interesting

On another front, I'm seriously thinking of opting for the Accelero Xtreme GTX 280 as an alternative to the standard NVIDIA GTX 285 cooler but I need to wait for some reviews as this cooler dumps all the heat from the graphics card into the system case. But the review of the GTX 285 mentions that the standard cooler is reasonably quiet at idle so I guess I could test it without the custom cooler first.

Update: Two reviews, both linked to from the Arctic Cooling site so no prizes for how well the Accelero Xtreme GTX 280 did, at HardwareOverclock and TechPowerUp. The latter site has a test of this cooler on the GTX 260 card which seems to show that it is equally quiet both at idle and at load.

If you don't mind swapping out the cooler yourself, the Thermalright T-Rad looks very promising.

Nice spot. Thanks for that.

No problem. There's also the Scythe Musashi which is very similar.

Re: Planning a workstation - comments please

The new build is complete but, of course, that's just the start of a couple of weeks of work, testing and transferring my working environment across from the old machine.

Just to recap, this replaces my ageing dual Opteron workstation and the aim is to have a machine that I won't feel guilty leaving switched on during the day, which is barely audible for regular 2D work, eats Photoshop for breakfast, enjoys a spot of H.264 video editing for lunch and for dinner can wolf down the likes of Oblivion or Flight Simulator X at 1920x1200 and still beg for more.

I had originally intended to reuse the case but that wasn't going to satisfy my need for exceptional and quiet cooling so I started the spending spree with a Lian Li:
I think my best summary of this machine is that it's a civilised thug. Hardly noticeable when idling along but can produce the horsepower when asked. Both the SSD and the RAID 10 array can produce data continuously comfortably in excess of 100MB/s and, while I didn't design for an ultimate gaming rig, I'm perfectly happy with a 3DMark 05 score of 16,800. That's nearly double what I had on my old dual Opteron 265/8800GTX machine which operates at about five times the volume.

But it's very early days and it won't be until I have a full suite of software installed and I can compare timings with Photoshop that I'll know how far into the next decade this machine will take me. Halfway would be nice and it would help spread the cost a bit.

Oh, and here's what it looks like inside before I replaced the fan on the CPU cooler with the original Noctua unit: 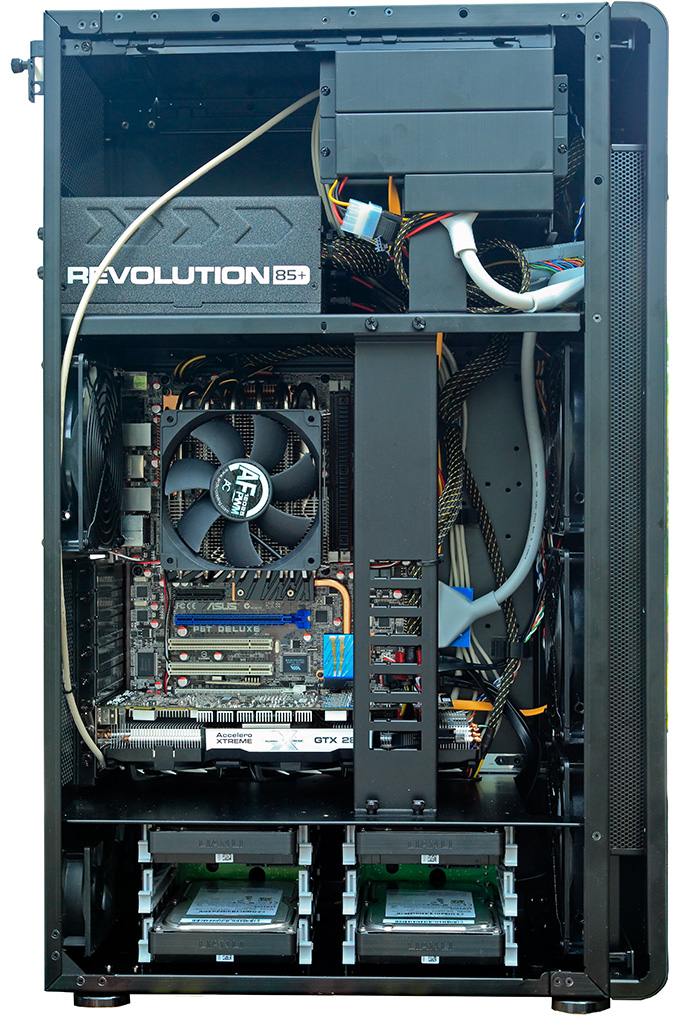 The optical drives mount sideways on in this case so all that can be seen from this view is the back of them.

That's a nice graph Bob, although my PC consumes 350 Watts in idle alone...
I take pictures so quickly, my highschool was "Continuous High".

Yes, my current rig consumes about the same power at idle, though that does include a 24" LCD monitor. Not at all friendly to the planet. Once the new machine takes over from the old I'll have it hooked into an UPS and then I'll be able to check the power consumption. I think I'll be lucky to get as low as 122W but I'm hoping for something below 150.

This one is just for you Bob. It's my I7-920 station. Please pardon me for the bit of clutter on my desk.

Yes, my current rig consumes about the same power at idle, though that does include a 24" LCD monitor. Not at all friendly to the planet. Once the new machine takes over from the old I'll have it hooked into an UPS and then I'll be able to check the power consumption. I think I'll be lucky to get as low as 122W but I'm hoping for something below 150.

Ah, my figure is just with a DIY UPS (old scrapped UPS with a dead battery hooked up to a car battery)