I've got that itch again. I want a bit more than one socket provides, so was wondering what's around by way of two socket mobos these days? Is it me or has the era of multi-core negated the need for affordable multi-socket solutions? So far all I've turned up is some server stuff where you can get overpriced underspeed CPUs on an expensive mobo.

Suppose the alternative is to wait and see if Ivy Bridge can provide a significant update in single socket configurations.

Edit: the Asus Z8NA-D6C seems to fit the "affordable mobo" part, but it goes downhill rapidly when you look at compatible CPUs for it. The affordable Xeons on offer are very slow around 2.4 GHz. Yes, there are faster ones, but the price gets insane quickly. Twice.

Have you perchance seen the June 2012 PCPro magazine? They have a feature "Build your own supercomputer" which, unsurprisingly, flags the most cost effective option as GPU based. Only works if your heavy duty apps can make use of one but many apps relevant to this forum do and, I believe, Photoshop CS6 is going to be even more heavily optimised in that direction. Maybe a nice Gigabyte GV-N680OC-2GD and a CPU upgrade might be the way to go? Given that I am still LGA1366 based an i7-990X Extreme Edition and that very graphics card are on my own wish list although neither may be in budget for a while what with a CSC and a couple of Astrodon filters claiming a higher priority.

I haven't seen that mag, actually I've largely stopped buying magazines long ago. The eternal question of GPU support is present, but at the end of the day I think CPU performance requirement isn't going away any time soon. One of the main drivers of my desire of more CPU power is PixInsight, which as far as I can tell does not yet make use of GPU acceleration. Nor is there anything definite on the radar as far as I can find on a quick search of their website and forums.

Have you overclocked your i7 2600k system yet?
That would seem to be the most cost effective option if you haven't already.

What ever happened to the concept of cluster or distributed processing as a solution for more CPU grunt? Alternatively go down the route of a blade enclosure and just slot in more and more blades to add to the processing power.

Building a random clusters is easy. Finding software that runs on it isn't. And that assumes the network side isn't a limiting factor where gigabit ethernet is usually considered inadequate for all but the most basic tasks, and going beyond that pushes up the cost rapidly. Given how much software that could benefit from GPU support but don't, how far off do you think clustering support is? I'm looking at running off the shelf software faster. For practical purposes, clustering is not an option.

And that assumes the network side isn't a limiting factor where gigabit ethernet is usually considered inadequate for all but the most basic tasks, and going beyond that pushes up the cost rapidly.

I wonder if you could use Thunderbolt (10GB/s) as the connecting interface and XGrid as the job controller software to reduce costs?

If it runs on Apple anything it's worse than useless to me. Try again

A bit of a broad statement seeing as you can run anything from MS Windows to Linux, et al on Apple kit if you put some VMware on the system. I am sure there are other configurations of OS and hardware that will run grid and cluster configurations but until Intel license Thunderbolt to other manufacturers you will have to put up with other connection interfaces and mostly slower speeds.

Maybe see what NASA are up to since this 2001 conference on Grid computing
http://www.nasa.gov/centers/ames/news/r ... _92AR.html

2001, hmmm I'm sure that has some significance

Ok, I could do what I have done before since Apple finally caught up with the rest of the world and used x86 processors, I can install Windows on an Apple box natively rather than mess around with virtualisation. But fundamentally the same problem remains, do they have a single box that is both affordable and has multiple socket CPU configurations? As far as I'm concerned, any form of software clustering, or virtual CPU distribution is no solution. Even if it were technically viable, a bag of apples isn't going to be cost effective.

To reiterate, I am not trying to build a top500 cluster for peanuts. I want a higher power desktop without paying server level money.

To help indicate what I was hoping exists, but I assume does not, this is the last dual socket box I built: 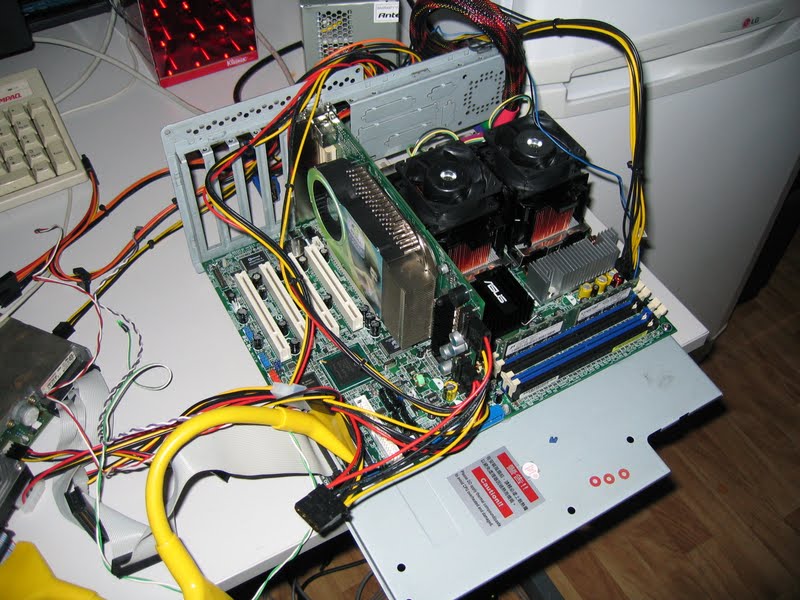 Here you see two Prestonia 2.4 GHz processors on an Asus PC DL motherboard. This was rather unique as it used a desktop chipset not a server one to provide the dual CPU support. The Presonias were mid generation netburst Xeon processors with HT, which were an easy overclock to 3.2 GHz. I was running a 2 CPU 4 thread system at 3.2 GHz in 2004. Dual core in a single socket didn't come along for another year, which eventually negated the need for dual socket in the affordable enthusiast market and I don't recall seeing anything like it since.

I'm not working to a hard budget, but let's just say a couple hundred for a mobo, and up to a few hundred each CPU would be within expectations.

I see you're problem a bit clearer now and I foolishly enough completely overlooked the extra QPI link Xeons have for multi socket setups.