Having captured this widefield shot of the NGC7000/IC1318 region last year with a 165mm focal length Pentax MF lens I wanted to try my hand at a four panel mosaic using my TEC 140. The 980mm focal length obviously meant a much narrower field of view and operating at f/7, as compared to f/2.8 with the Pentax lens, meant much more time spent capturing the subs. Here is a thumbnail of the final result at one eighth size: 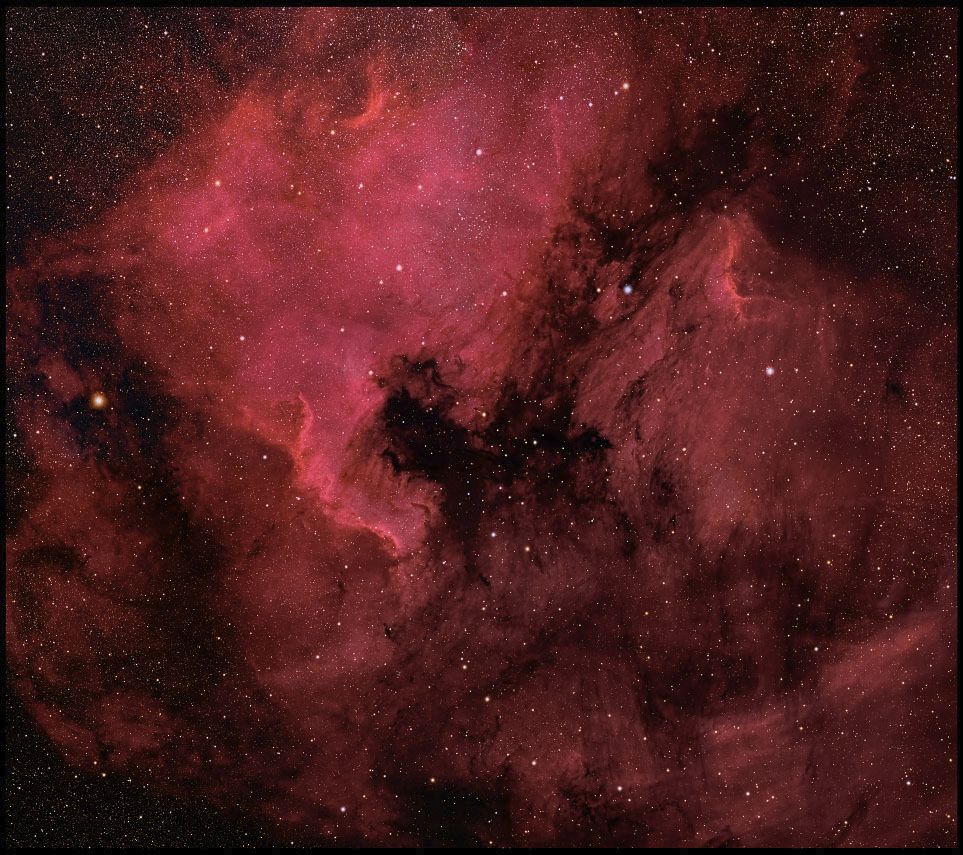 Each panel required 16 x 1,000 second H-alpha subs and 5 x 200 second subs in each of red, green and blue for a total exposure time of a little over 21 hours. PixInsight was used to produce both an H-alpha and an RGB mosaic. The H-alpha image had the stars removed (in Photoshop) and was a blend of that "no stars" image together with processed versions using PixInsight's LocalHistogramEqalization and HDRMultiscaleTransform tools. The RGB image was split into "no stars" and "just stars" versions. The "no stars" image, while considerably less deep than the H-alpha image, was used to modify the colour of the brighter regions of the nebulosity while the fainter regions were coloured with my default "red plus a bit of blue". The RGB stars were then added to the colourised H-alpha data. Lots of tweaks along the way but those are the key steps used.

I think I've learned a lot while processing this image and I've come away with a huge respect for those who routinely do mosaics involving more than two panels. When I look at my own effort closely I see all sorts of defects and I rather doubt that I'll be jumping back into a similar four panel project for a while given the amount of telescope time required, time which has been particularly precious here in the UK this summer. 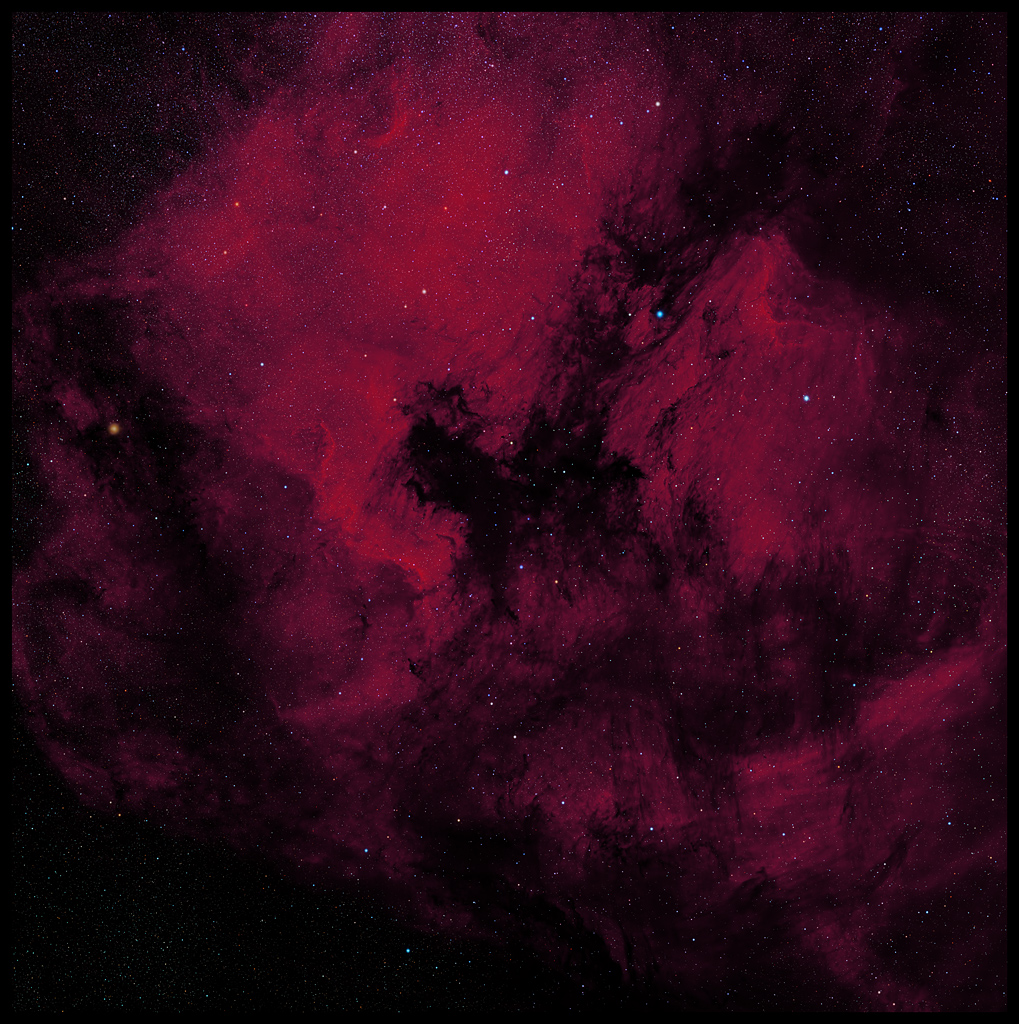 I've reused my original H-alpha imagery but applied a different colouration curve. The main thrust of the processing was to explore my new stretching workflow for the stars with an emphasis on colour retention. The mosaic proved a tough challenge with colour shifts across the various panes (there are still a few awkward areas).

Update: I applied an extra large scale deconvolution step to the stars this morning which, at the cost of a little colour intensity, has helped give a better intensity profile to the larger stars. The image above has been updated.

.
Glad you liked it.

Probably a bit OTT for this forum but for those interested here were the processing steps relevant to the stars. The RGB data was processed using my new PixInsight Repaired HSV Separation Script. That produced both "repaired" RGB and also "repaired" HSV separation images. The V component and the repaired RGB were both stretched using PI's Masked Stretch script and both were given a further light stretch, together with restoration of the black clipping point, using the normal histogram stretch module. The stretched V was then recombined with the H and Sv components. That left me with two colour images and, as is now usual, I added them together. This might seem odd but the image resulting from the V stretch tends to have highly coloured but rather flat stars whilst the stretched RGB has less colour in the stars but a better intensity profile. Bottom line is that it works for me. Processing then continued in Photoshop where I removed the background nebulosity. That allowed me to correct, as best I could, artefacts introduced as the mosaic was assembled and also, dropping back into PI briefly, to do a light small scale deconvolution. After this morning's additional large scale deconvolution the stars were added to the H-alpha stack to produce the result above.

I don't know how, but the second one makes me feel like I'm actually looking at the sky at night in a foreign planet (or whatever

Same here. Glad you like it. I'm sure there is still room for improvement but I'm gradually closing in on the look I want for my astro-photos.

Here's a rather different take on the subject, this time with processing prioritised towards highlighting the dust. That needed a brighter background and I've also much improved the star colours. 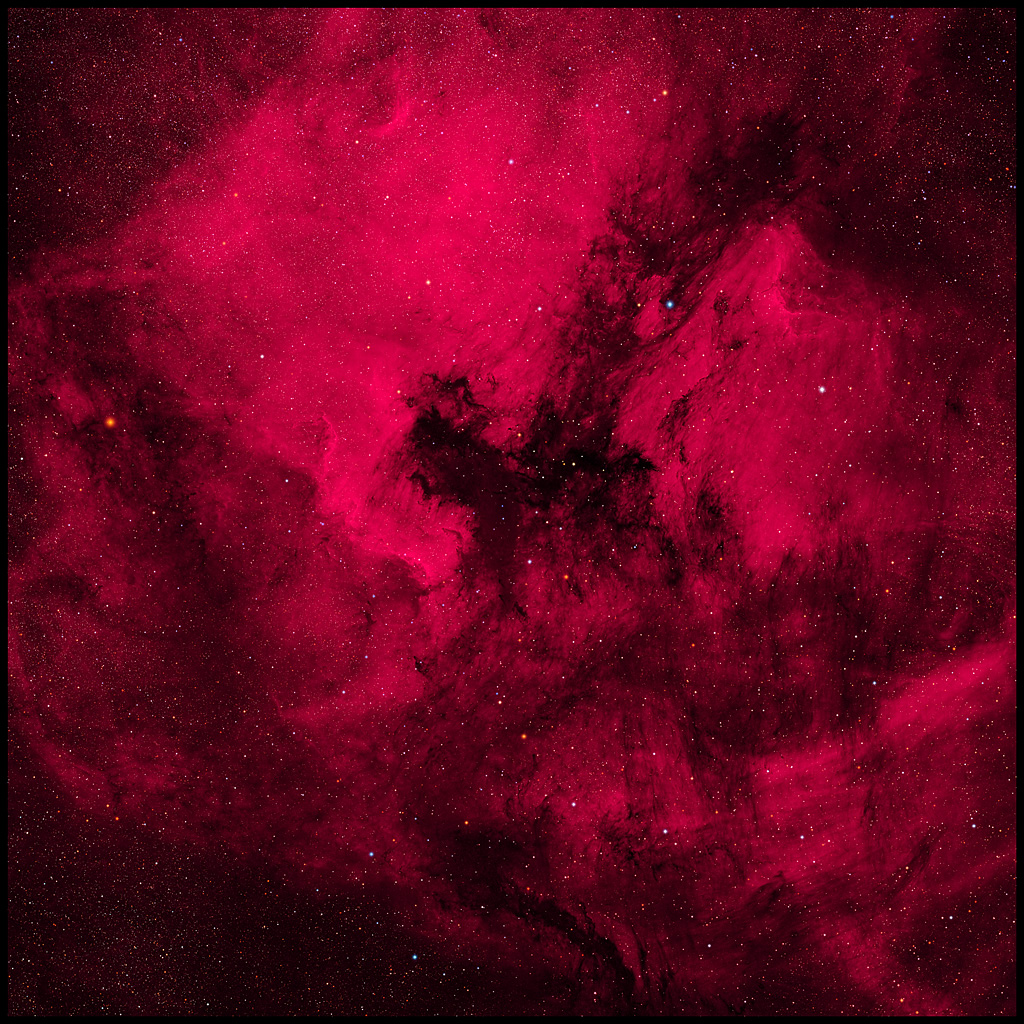 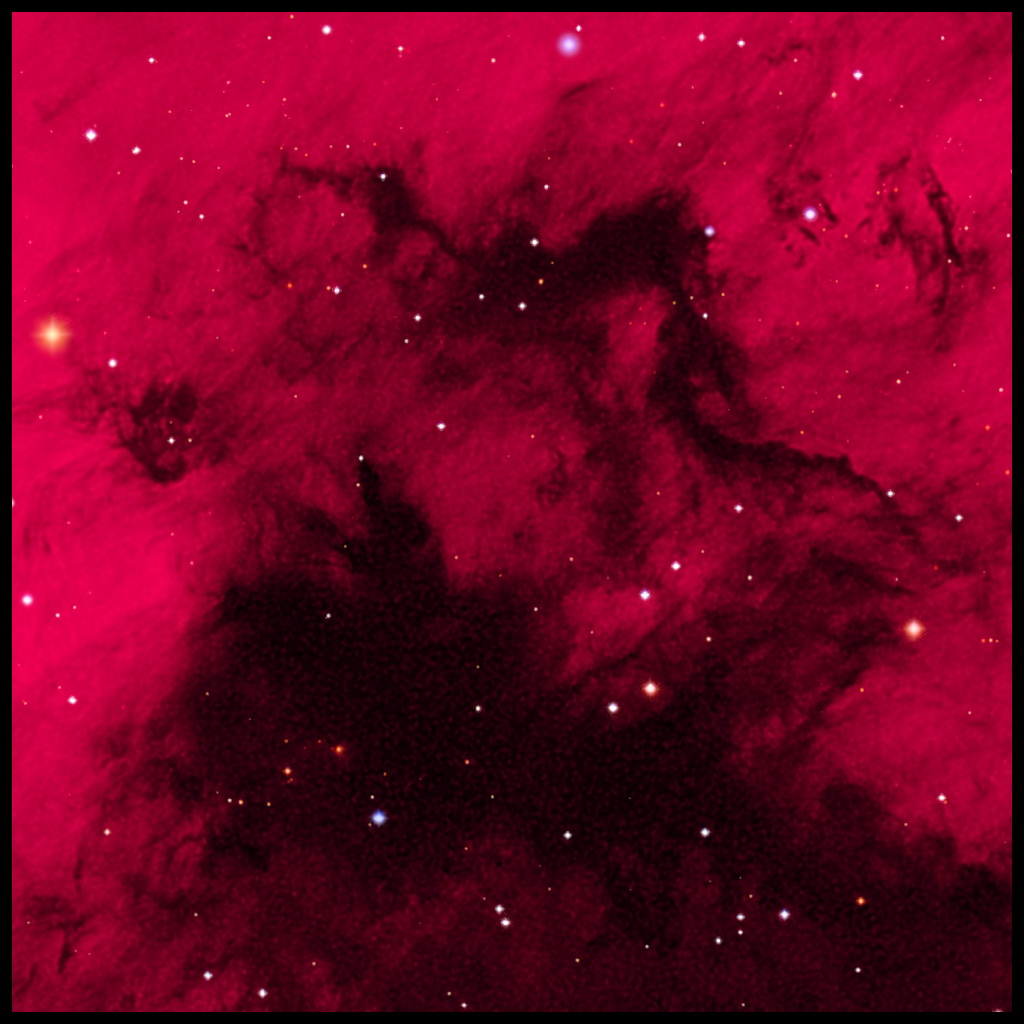 Finally, here's a 3.6x size reduction crop of the dust cloud, a dark nebula whose official classification is LDN 935 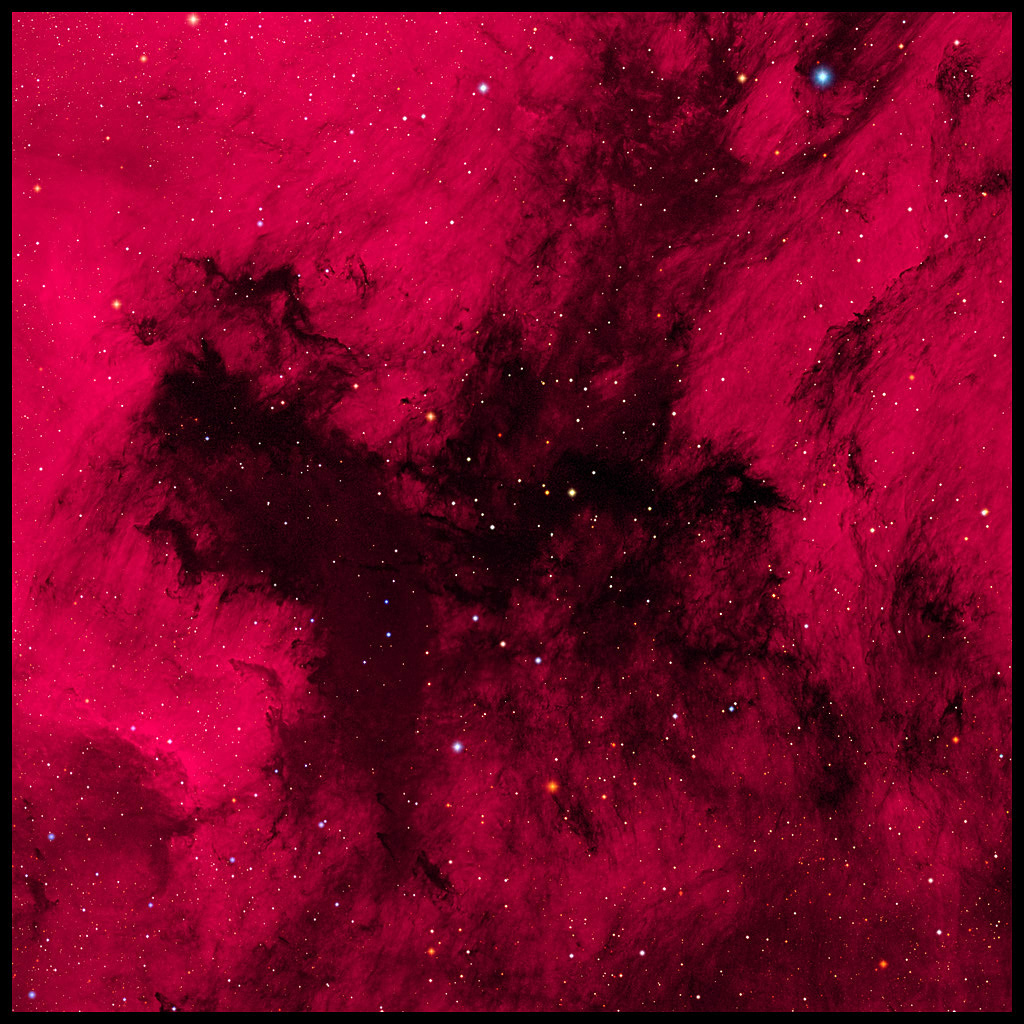