Congratulation popo! Have some fun - and may this lens capture you a lot of beautiful photos!
And please post some pics here.
Thomas (beware: Nikon-fanboy and moderator!) My Lens Reviews, My Pictures, My Photography Blog
D810+assorted lenses

Gave it its first serious use today... and I left myself more confused than when I started. Long story short, initial testing seemed to show focus was good enough, so I just used it. I saw backfocusing in the field but wasn't sure if that just me being too rusty on using the 5D2 or was it due to the lens. Then I noticed the AFMA was set to +17. My guess is this is the value I entered for the Zeiss 50 makro, and as they report themselves as "50mm lens" they ended up sharing the same value. I tried fiddling with it in the field but was getting nowhere.

Now, the above didn't stop me getting shots, although it may be a question of focus reliability. 50mm f/1.4 at close range for wildlife wasn't the best mix, as the DoF was often smaller than the width of the subject's eye... 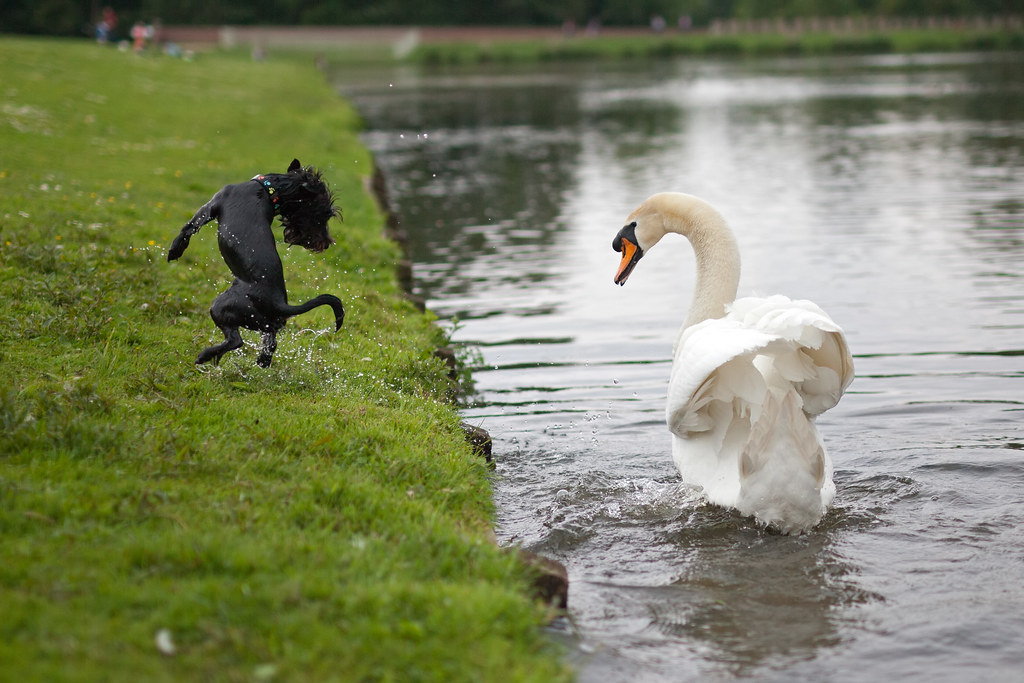 A quick sample for now. This was more distant, and the focus was good enough by luck I have to admit. I did crop this image to better frame it, but if you can figure out flickr's current interface it is 100%. I should also add I just did a quick and dirty process on this, and the 100% view wasn't optimised as it was just an intermediate step to a smaller web view I posted elsewhere.

Interesting report - and a nice photo, popo!
Keep on trying to solve the AF-topic.
Thomas (beware: Nikon-fanboy and moderator!) My Lens Reviews, My Pictures, My Photography Blog
D810+assorted lenses 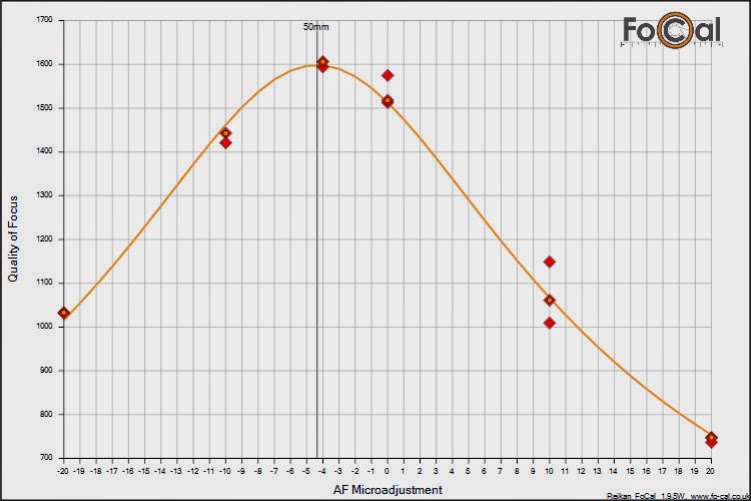 Since I bought Reikan FoCal ages ago, I dusted it off, installed the latest version and ran the lens through it. Above is the AFMA chart it came up with at f/1.4. Essentially it did tests at -20, -10, 0, +10, +20 (body settings, not lens settings), determined from that the optimal value was -4, and that was that. Note it looks like -4 is hardly better than 0. And the +17 I had left on body before should have been way off! I don't have any explanation as to why results seemed ok previously, unless the error with focus distance is significant. I should add, this testing was done at approximately 50x focal length (2.5m), where the software reported I was at 2.8m. 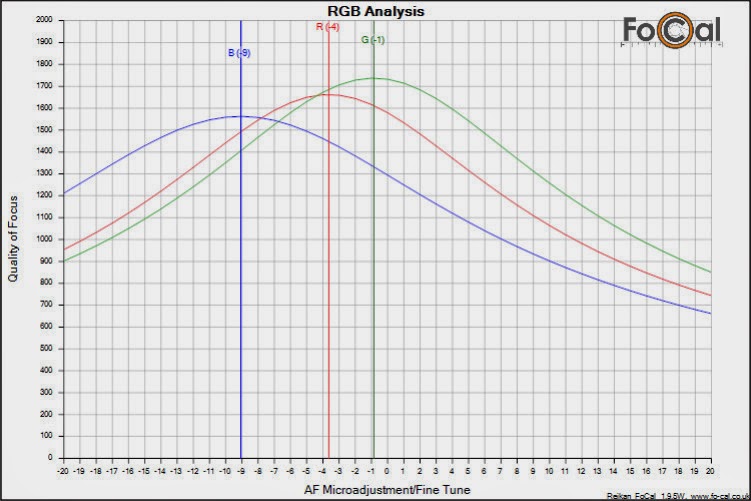 It also offered the "RGB" analysis, and interestingly it shows the channels don't meet at the same point. This likely contributes to the visible LoCA in wide open shots. As well controlled it may be, it certainly is not absent. 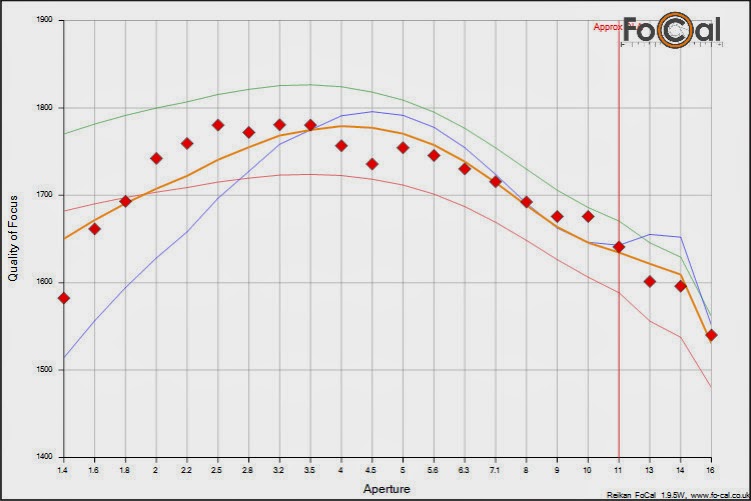 And finally... here's the "aperture sharpness" test. I've not run this before. There was a checkbox for something about finding optimal focus which I didn't set. I should read up what that does! As it was, I don't know if it re-focused or reused the focus from the previous testing. It is still interesting. The points are the readings, of which there was one per setting. Note this only tests the centre of the lens. I guess it could do corners too with appropriate setting, but that's beyond me at the moment.

The orange line appears to be the (smoothed) overall characteristic. Not surprising, the levels rise from wide open are are generally flat from f/2 to f/5.6+, gradually dropping off after that. More interesting is once again we have an RGB plot. This appears to be smoothed too. Interesting the blue channel seems to take a bigger dive wide open. Experience of other (Canon) lenses seem to suggest red is the one more likely to defocus relative to green and blue. I might have to repeat this with the 135L as that is a good example of such.

In another forum there were reports of different focus points delivering wildly varying results.
Did you test everything with the central point only?
Thomas (beware: Nikon-fanboy and moderator!) My Lens Reviews, My Pictures, My Photography Blog
D810+assorted lenses 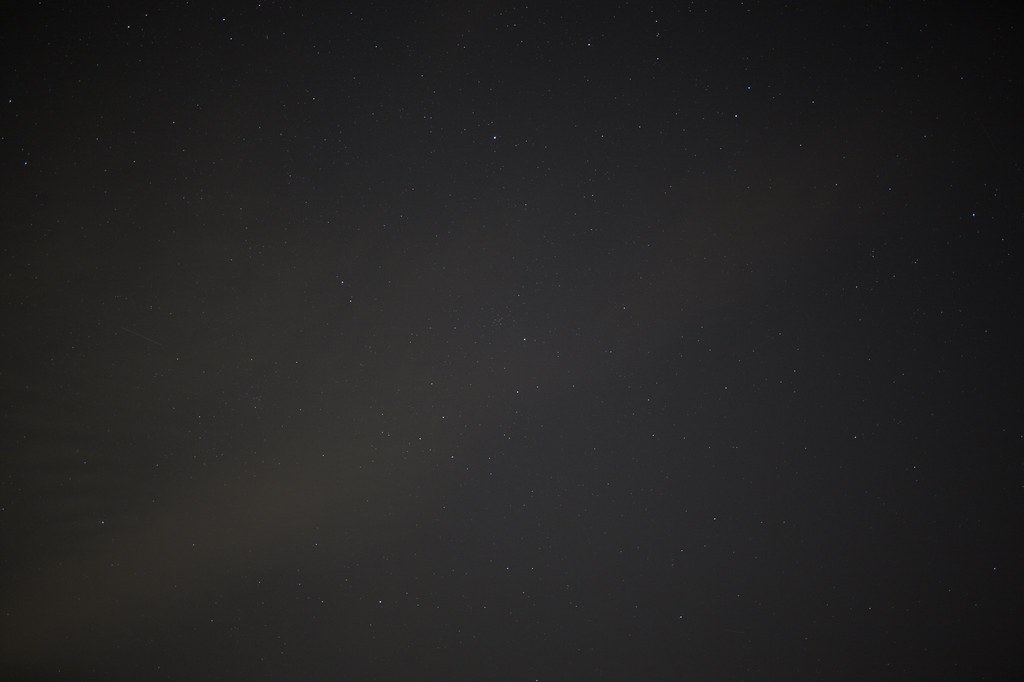 As a sample image, this may not be terribly exciting. But the biggest stress test a lens can get is trying to reproduce pin points of light across the whole frame. Hopefully that link works for everyone. Basically I took the 5D2 it happened to be sat on, plonked it on a tripod and gave it 5 seconds at a random bit of sky. By chance it seems I got Cebalrai in the middle of the frame. Now I don't know if you'll all agree, I don't think this looks bad at all. There might be a tiny amount of trailing as I wasn't using a tracking mount, but stars in the central region look good to me. If you move out to the corners, it does fall down with what might be astigmatism and coma creeping. But move back in a bit to what might be APS-C corners, I think we might just get away with it! At f/1.4!!! Vignetting is rather strong on the full frame, but again going down to APS-C should negate that to a degree.

Of course, at only 50mm it will be relatively wide field only. Might be interesting to see the H-alpha emissions around Cygnus, if my narrowband filters don't cry at such a light cone thrown at it.

I'm confused (easy to do) as clicking the link takes me to a Yahoo log in page.

Going "Public" fixed it. And after a couple of minutes I even managed to find a way to see it at full resolution. I know I said I get confused but I really don't like what has happened to the Flickr UI. Looks like it has been designed by a bunch of yahoos.

That lens has to be a keeper! Far better corner resolution than I used to get with my 85mm f/1.2 lens back in the day when I thought DSLRs were cool.

Batch of test-shots through all apertures can be seen here.
First impressions:
- Sharp in the center, some decline from the DX image-circle on
- Hard to find the optimal AF adjustment, AF seems inconsistent at times
- at 2m distance the lens shows field-curvature
Thomas (beware: Nikon-fanboy and moderator!) My Lens Reviews, My Pictures, My Photography Blog
D810+assorted lenses

40 test-shots of AF over a distance of 100m on a contrasty well-lit subject from a tripod showed only very little variation in AF. Excellent!
Thomas (beware: Nikon-fanboy and moderator!) My Lens Reviews, My Pictures, My Photography Blog
D810+assorted lenses

Here's a f1.4 shot of a girl turning the "lucky golden ring" at the Schoener Brunnen in Nuremberg (uploaded in full 36MP resolution). With the brightly lit background you can look for longitudinal CA (in the fence) and background Bokeh - which is a bit nervous in the figures in the top left corner: 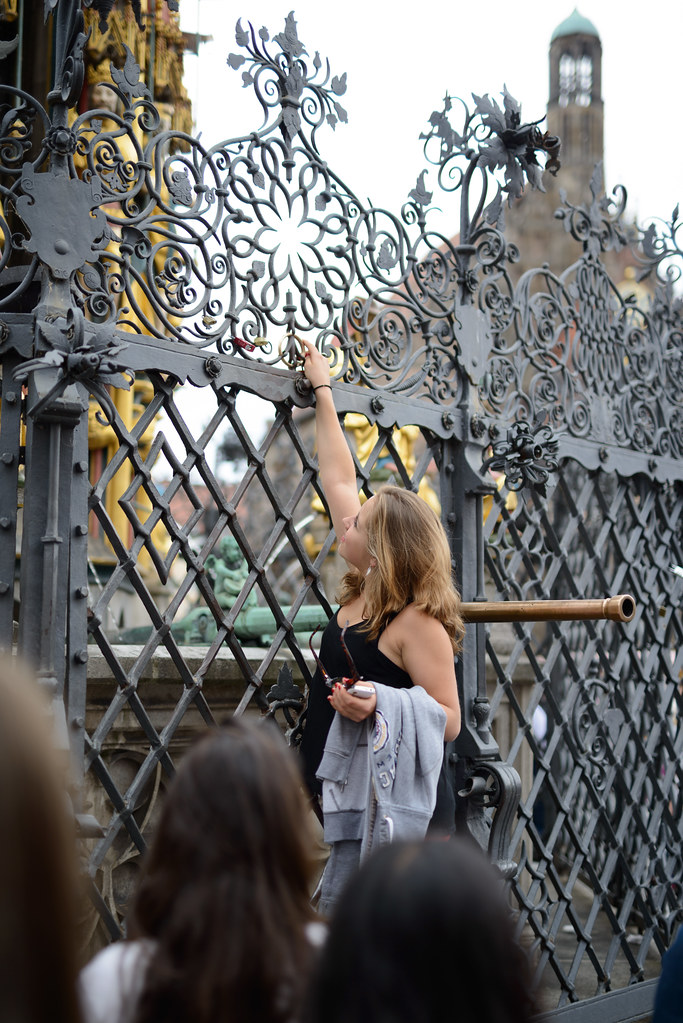 Sigma_50f1-4Art_f1-4_78476 by Thomas, on Flickr
Thomas (beware: Nikon-fanboy and moderator!) My Lens Reviews, My Pictures, My Photography Blog
D810+assorted lenses

I'll try FoCal, too. The tedious work of getting the right AF-adjustment was never one of my favorites. For the reviews I mostly do contrast/LiveView-based AF (with manual optimization).
But I fear that checking and rechecking the results from phase-detect AF will still stay with me, even after using FoCal...
Thomas (beware: Nikon-fanboy and moderator!) My Lens Reviews, My Pictures, My Photography Blog
D810+assorted lenses