Rather ahead of the widely expected schedule it seems as though Leica is going to make "a whole range of product launches in a culturally and photographically unique atmosphere on 10-11 May 2012 in Berlin..." (LeicaRumors)

Mirrorless Rumors goes one better and publishes a photo of an invitation:

The M10 is widely touted and if we're lucky we may also see more about the CSC that Leica sort of pre-announced last year. May 10th - put it in your diary now!

Let's wait and see! I'm particularly interested in the CSC and what Leica plans to compete with in that segment.

.
Yep. Fuji have shown the way ahead - if Leica can find as good a sensor and add their own secret sauce to a CSC body together with their legendary glass I think they can name whatever price they want.

M9 sensor is made by Kodak.
And it seems that Kodak future readability is quite blur. And, as you know, blur is a nonexistent fact in Leica's DNA

by the time M10 gets released to the market..

While in am not in a hurry for a successor to the M9, I am paying attention, as the most likely time for me to purchase such a camera is when I retire, and "roll" some tax-deferred savings into my regular bank account. I am likely to retire while the M9's successor is the current model.

I'll re-use this thread as the announcement date is tomorrow but the rumour mill has settled on the next M-system body incorporating an 18MP monochrome sensor (from Platinum Equity who bought Kodak's sensor division a while back). Presumably this will not be called the M10. Perhaps they can call it the M9-M or, for later risers who like sapphire glass, the M9-PM.

The promised Leica CSC announcement doesn't seem likely if the rumours are correct.

.
and here's what was actually announced, the biggie being the M-Monochrom: 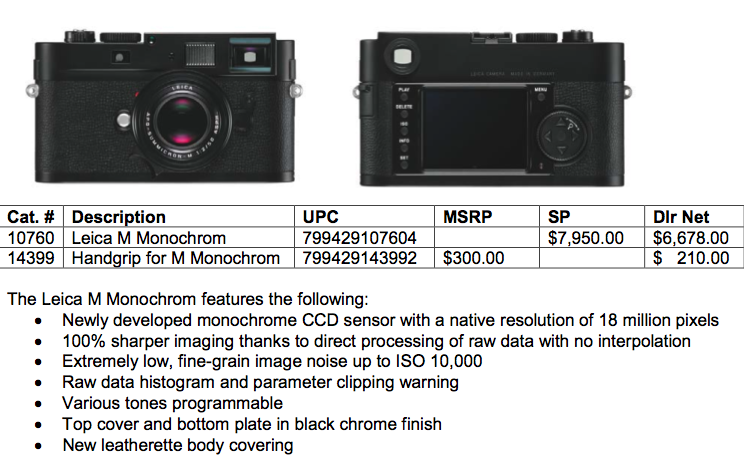 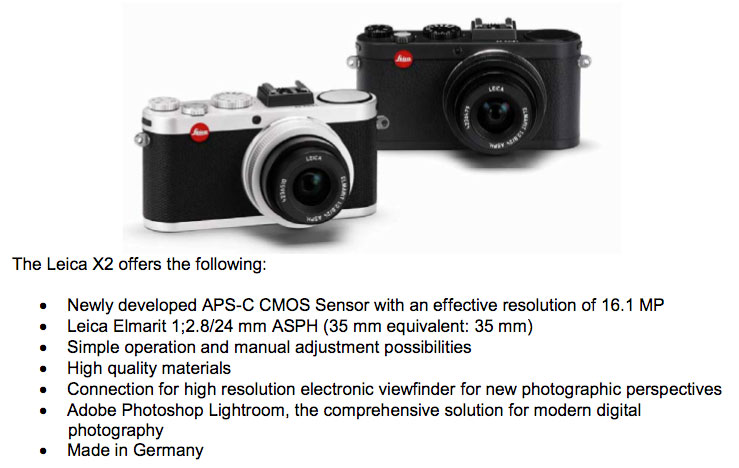 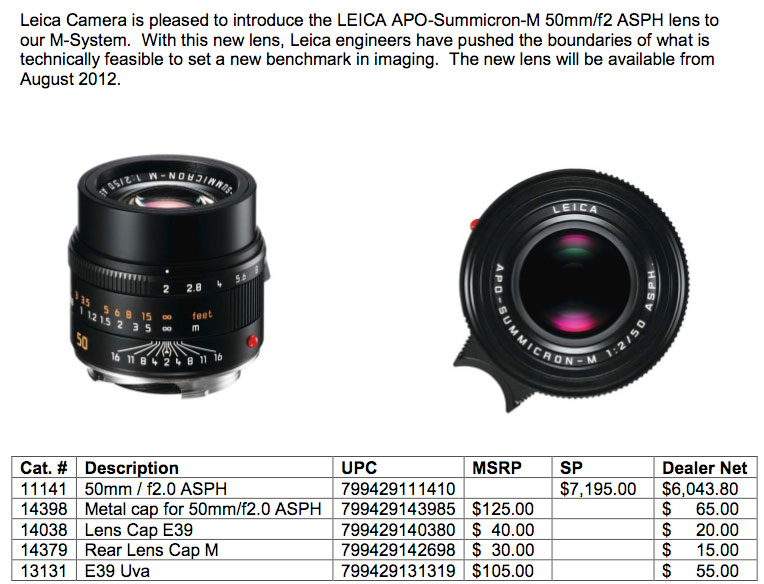 I've no idea what the X2 pricing will be. It's quite interesting to see the difference between the dealer and suggested retail prices. Roughly a 20% mark up but when you factor in the exclusive environment of a Leica boutique and all the customer support that such stores provide I think that's very fair. Leica fans will no doubt be happy enough with the new products but boy, one does need deep pockets. Too rich for me!

Does the new 50mm lens not come with the caps etc?
If they are prices for replacement/lost items, although not cheap, fair enough, but for the sake of Â£60 to Leica on a new Â£6.5K lens?????

.
Nah, they ship the lenses without caps so that when they arrive you get that nice dreamy look caused by scratches on the coatings.

I'm reminded that this is a two day event so while the main announcements have presumably been made today we may get to hear more about Leica's future plans although there probably won't be too much detail.

Refreshed after a good night's sleep what to make of the Leica M-Monochrom? Essentially an M9 body, with all it's strengths and weaknesses, with a black and white sensor which offers pin sharp resolution, less noise and the opportunity for higher ISO will appeal to the Leica guys and gals who regularly discard the colour information anyway.

The elephant in the room is the M10. If the output from the M10 were converted to black and white how close would the IQ get to that of the Monochrom? Hard to say, particularly as the M10 hasn't even been announced, but my guess is that if Leica are able to deploy a class leading sensor the difference would be irrelevant for all but the most demanding work. And the M10 would also offer the ability to correct chromatic aberration, something that isn't possible using a monochrome sensor. Chromatic aberration may not be much of an issue with most Leica glass (I've not read enough reviews to know) but there doesn't have to be much present at the corners of an image to wipe out any gains that a monochrome sensor can claim in terms of increased resolution because it lacks a colour sensor's Bayer matrix. Guesswork on my part so take your own view on that.

One would also expect an M10 to feature other improvements. The specialist forums are full of suggestions and almost equally full of denials that such improvements are needed (LED illuminated frame lines, focus confirmation, an improved rear LCD and behind the scenes firmware/hardware improvements) but, however it turns out, Leica know their customers and I'm sure the M10 body will be another step up from the M9.

The bottom line is that if I won the lottery I'd want both an M-Monochrom and an M10 just because I could. But if forced to choose just one body then I'd wait a few months and, if my guesswork is correct, buy an M10. The M9 already offers options for Black+White and Vintage B&W shooting and I have a feeling that the M10 may come very close to the M-Monochrom in those modes and it, the M10, will also be able to do colour and have the advantages of a next generation body. A no-brainer, so far as I'm concerned, but that's assuming I have a working brain in the first place!

Not something I ever did myself, but I understood in the monochrome film days photographers would select colour filters to use for a given image type to emphasise contrasts in the scene. Using a monochrome sensor would likely result in returning to this, since you can't essentially do it in post like with a colour image. Using colour filters may render the need for CA correction moot while still offering increased overall sensitivity and resolution with no wasted pixels picking up colours you didn't want.

popo wrote:...niche of a niche.

Both the Monochrom and X2 have my attention! The X2 seems it may be a fix for the X1's shortcomings. I have long liked the X1, but had not purchased one, hoping for a firmware update or newer model to get better auto-focus performance.

The Monochrome displaces the M9 at the top of my list of dream/fantasy digital cameras. I shoot color as part of my job, but like monochrome for my personal shooting. The concept of producing a sensor that is optimized for monochrome is appealing to me!
Canon 5Ds R/7D2/7D/5D/40D/1D2N; Nikon F6/D3s/D700/FM3A/Coolpix A. Lens selection undergoing changes; some favorites: Zeiss 2/135 APO Sonnar, Canon 100mm f/2.8L Macro IS and 135L, Nikkor 14-24/2.8G and 200/2 VR.

Leica has a long heritage of producing premium products built to stand the test of time out of the very best materials on the market.
As well as offering storage options through a conventional SD cards, the Leica also offers an impressive 16GB of internal memory â€“ an amount more than enough for most casual users in between uploading images to their laptop or desktop.

Looking forward for more invention in the future.