If it's used to carry or protect photographic equipment, talk about it here!

Just got hold of me new 1200 pelicase and been messing with packing it out. 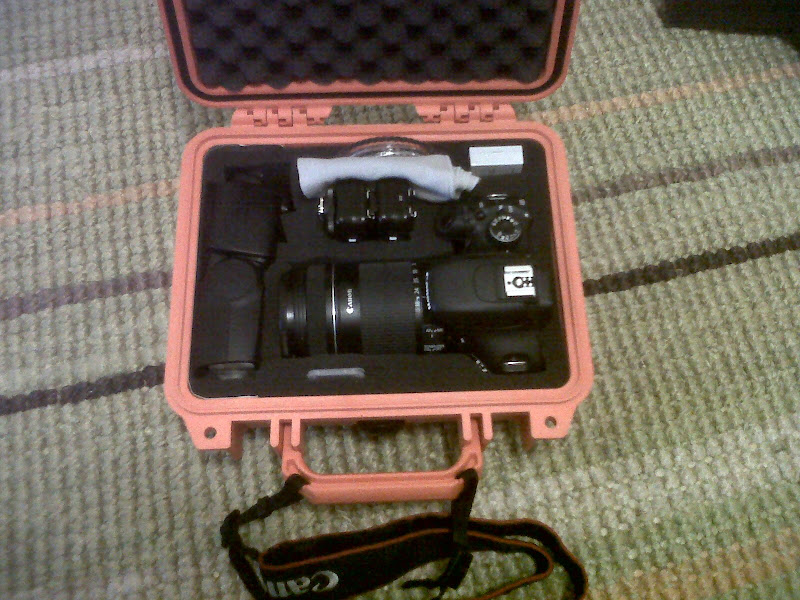 Pelicases are the only thing I'd trust to be waterproof in a properly wet environment (I'm a kayaker/canoeist). Drybags arent waterproof.

I brought the 550D instead of the 7D specifically because I know it would fit in this case. The 1200 Pelicase is the biggest that will reasonably fit into a modern white water kayak. The internal height is 104mm, the height of the 550D is 98mm and the 7D is 111mm

I've got the 18 to 135 kit lens, 430 EX II Flash, wireless flash triggers, flash stand, spare battery, spare sd cards and a cloth in there too. I'll probably carry an SLR Gorillapod in the boat too, its plastic so wont matter if it gets wet.

I've taken the strap off the camera for 2 reasons. 1- it was just getting in my way anyway and 2- it might interfere with the O ring seal.

The camera has Magic Lantern installed so I don't need a remote (ML has a facility to use the rear IR sensor as a trigger) or an intervelometer.

I got the case from http://www.waterproof-cases.co.uk/product_detail.php?n=1200&theProduct=41

I picked orange as high visibility is always a good option on the river. Black wouldn't be a good option as I live in the middle east and it would just cook the camera even on the cool days. Desert tan was considered but visibility won over subtlety.

I also purchased a strap but it doesn't fit the case in anyway hence you can see I'm experimenting with the standard Canon camera strap. I'd rather something more subtle though. Traveling with expensive camera kit in developing world countries its better to minimize your branding as much as possible to prevent opportunist theft.

Now to sort a paddling or surf trip